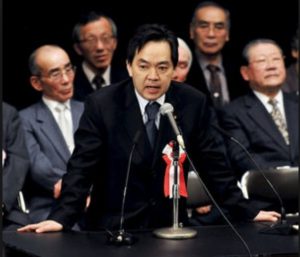 Japan is famous for its economic transformation from post-War devastation to one of the world’s top economic powers.  But how much progress did Japan really make after the ‘Bubble’ burst?  With the new Japanese emperor getting ready to ascend the throne of the land of the rising sun, we can reflect on what actually happened during the time of his father, otherwise known as Heisei.

In the May meeting, we are pleased to welcome Mr. Keiichiro Asao.  Mr. Asao started his career at the Industrial Bank of Japan (“IBJ”), which is now part of Mizuho Bank, and was a member of the Diet (both the House of Representatives and the House of Councilors) for almost 20 years.  He will share his insights on what happened during Heisei, where he sees Japan heading into the new Reiwa Era, and brainstorm with the CI members about the future of Japan from both political and economic perspectives.

Mr. Asao is not your typical Japanese politician, he is a business professional with extensive political experience.  At one time, he was the leader of a political party called Your Party (i.e. minna-no-tou), and is currently a member of the Liberal Democratic Party.  He is one of the rare top Japanese politicians who are fluent in English.  He received a law degree from the University of Tokyo and an MBA from Stanford University.